SHSU Update For Week Of April 30

Nixon spoke to over 20 students about his 14-year career as a CIA analyst, the nature of espionage, and his approach to interrogating the former Iraqi 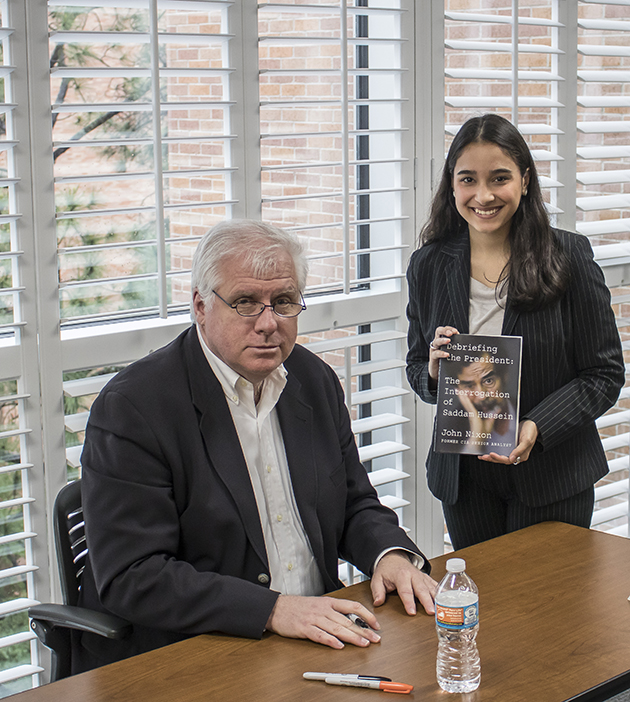 Following his graduation from New York University with a master’s degree in history, Nixon applied to the CIA, only to be turned down. Believing the CIA was where he belonged, he applied again seven years later, following another master’s degree. This time, he was hired.

Nixon said the interrogation process began with him volunteering to go to Iraq shortly after the war broke out in 2003. He served as an Iraq specialist before switching to a focus on Iran. With few other war zone volunteers, the CIA selected Nixon.

Nixon stressed the importance of having the right skills.

“The demand for some skills comes and goes,” Nixon said, “but the demand for people who can communicate—especially in written form—will always be there.”

Nixon noted his training as a historian provided skills useful in the CIA.

When Saddam Hussein was found hiding in a camouflaged tunnel in 2003 with extensive discussion of Hussein’s use of body doubles to disguise his movements, an expert was needed to identify the Iraqi dictator. Nixon’s knowledge of Hussein’s tattoos and scars proved instrumental in the final identification.

“I used to believe we knew Saddam Hussein very well,” Nixon said, “but 13 years later, I feel like we didn’t know him at all, and it’s something I think about every day.” 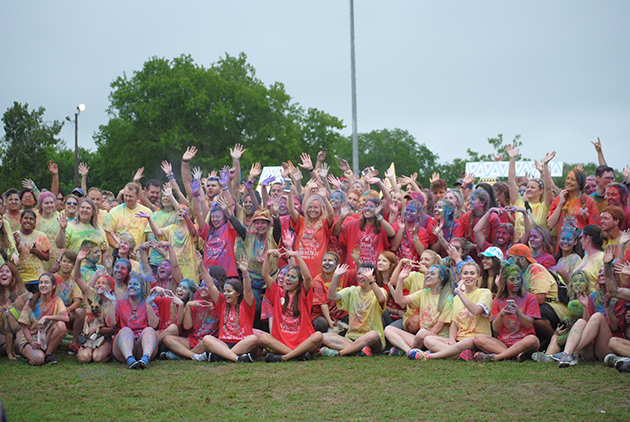 All proceeds were donated to the Ronald McDonald House Charities.

Always held in April, the run takes place in the morning with music, raffle baskets and pounds of color thrown into the air.

“The great thing about Ronald Run isn’t the run itself, but the families we impact by our hard work and determination to make this event successful,” Alpha Delta Pi President Darby Humphries said. “The long standing relationship between Alpha Delta Pi and the Ronald McDonald House is something special that we hope everyone who attended the run will see.”

Alpha Delta Pi is dedicated to strong leadership, strong scholarship, and community service. Since Alpha Delta Pi’s partnership with the Ronald McDonald House in 1979, the Delta chapter Mu at Sam Houston State University has been dedicated to providing financial and moral support to the foundation.

Priority One To Host News Anchor 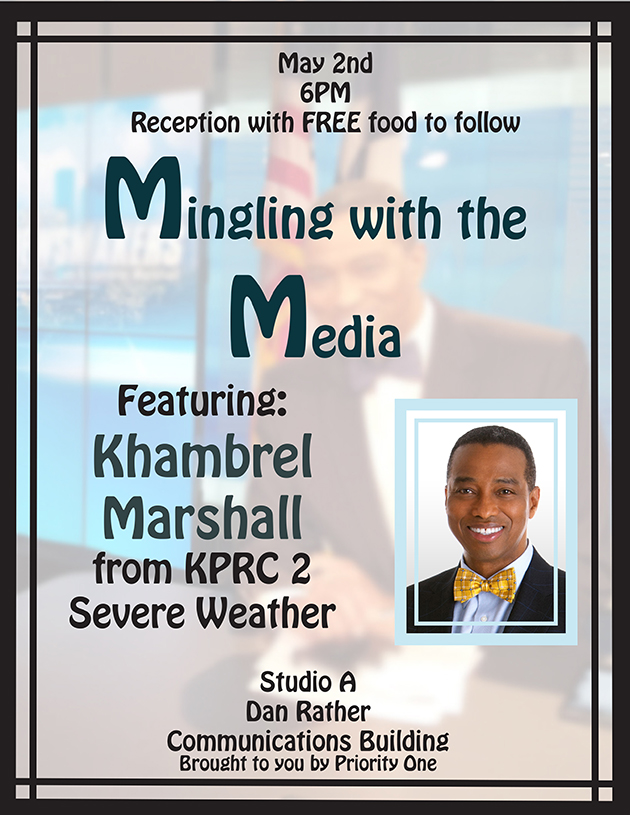 Sam Houston State University’s Priority One Public Relations firm will host Khambrel Marshall, news anchor for KPRC Local 2, during their “Mingling with the Media” event on Tuesday, May 2, at 6 p.m. in Dan Rather Communications Building Studio A. A reception will follow.

Since 1999, Marshall has served on the KPRC Local 2 Severe Weather Team and host of the weekly news show, “Houston Newsmakers.” Marshall also received an Emmy award, the highest broadcasting honor, for a series titled “Guardian At Sea,” where he documented the efforts of the U.S. Coast Guard to rescue Cuban and Haitian refugees crossing the Florida Straits.

“We are ecstatic to host Khambrel Marshall,” Priority One Account Executive Darby Humphries said. “This is a great opportunity for everyone at SHSU to learn about the daily occurrences of a journalist and broadcaster who works locally in Houston. Even if you have the slightest interest in the daily activities of a news anchor, you should attend the event.”

Priority One is a student-run public relations firm composed of 14 members. The team prepares communications plans, media kits, productions of City Spotlight, and more to clients on campus and around the Huntsville area.

The event is free and open to SHSU students, staff and faculty. 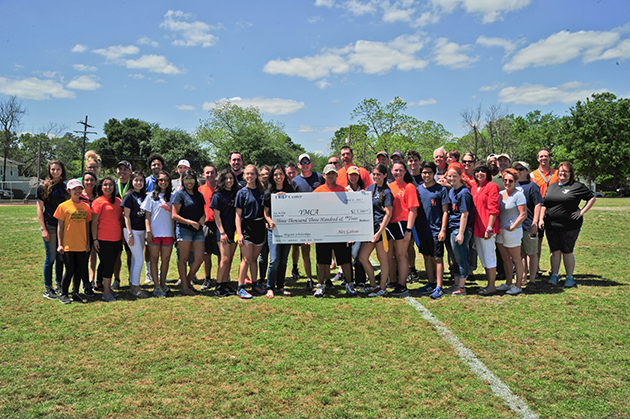 which raised $7,390 for the Holcombe Scholarship and Huntsville YMCA.

Three faculty and staff members participated in the game, with students and civic leaders rounding out the rosters.

Among the faculty and staff members were Tom Haase, assistant professor in the Department of Political Science; Mike Yawn, director of the LEAP center, and Russell Martinez, director of Development for Athletics.

The football game originated in 2008 and was designed to raise funds for local causes, promote a cooperative spirit among local Democrats and Republicans, and foster civic engagement among college students.

A large portion of the Holcombe endowment is funded by proceeds from the LEAP Center’s annual charity game. As for the YMCA, the funds are given in the form of scholarships to students who cannot afford the program fees.

To read more stories about the LEAP Center, visit their blog.

Yellow Fever Exhibit Set For May 2-6 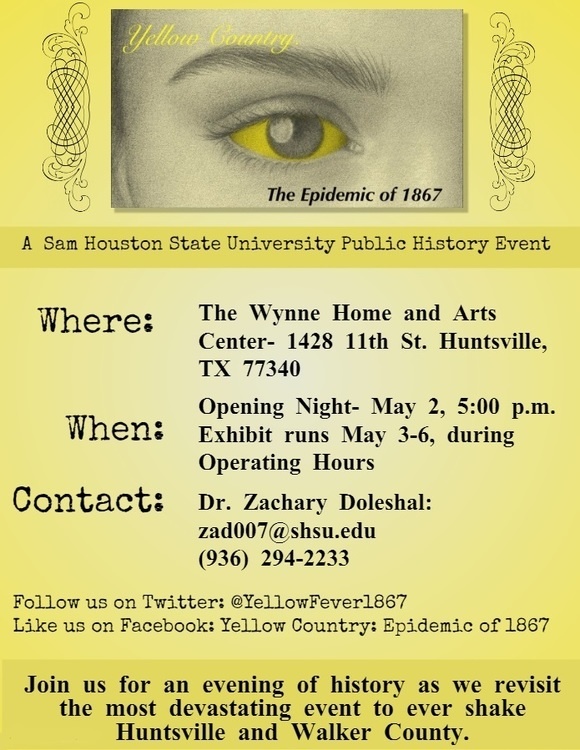 The Wynne Home Arts Center will host a public history event, in conjunction with Sam Houston State University’s College of Humanities and Social Sciences, covering the Yellow Fever epidemic of 1867, from May 2-6 during operating hours. Admission is free.

The public will be provided with an in-depth historical look at the events surrounding the yellow fever and the impact the disease had on the history of Huntsville, Walker County and East Texas.

The epidemic of 1867 that swept through Huntsville and the surrounding area was one of the most notable biological disasters in Texas history.

Originating in Indianola in June, the disease traveled by way of infected persons and mosquitoes across Texas, claiming approximately 3,500 lives.

In Huntsville, approximately 130 citizens died, which was around 10 percent of the town’s population, and displaced many more.

Once the first frosts ended the epidemic, the course of history for the city of Huntsville, and for the state of Texas, was forever be altered.

The Wynne Home Arts Center is located at 1428 Eleventh Street in Huntsville. 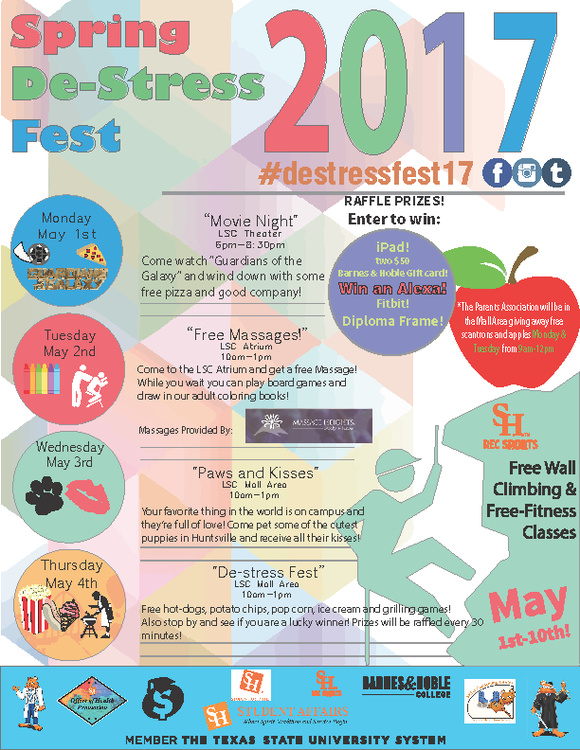 Sam Houston State University will hold a series of events for De-Stress Fest 2017 from May 1-4.

On Monday, May 1, students can participate in Movie Night from 6-8 p.m. in the Lowman Student Center Theater.

“Guardians of the Galaxy” will be screened and pizza will be provided. The film was released in 2014 and boasts a certified 92 percent fresh rating on Rotten Tomatoes. It stars Chris Pratt, Zoe Saldana and Dave Bautista.

Free massages will be given on Tuesday, May 2, from 10 a.m. to 1 p.m. in the LSC Atrium. While students wait, board games and coloring books will be available.

Students will be able to pet dogs, with the assistance of Huntsville Pets Helping People, to help relieve stress before finals begins.

To round out De-Stress Fest 2017, hot-dogs, potato chips, popcorn, ice cream and grilling games will be provided on Thursday, May 4, from 10 a.m. to 1 p.m. in the LSC Mall Area. Prizes will also be raffled every 30 minutes.

Veteran Stole Ceremony Set For May 3

The Sam Houston State University Veteran Stole Ceremony for veteran students graduating in the spring will be Wednesday, May 3, at 5:30 p.m. in the Katy and E. Don Walker Education Center.

The Veteran Resource Center established the ceremony as a way for the university to honor and show appreciation to the graduating veteran students.

Fernando Chavez, director of the Veteran Resource Center and former information systems technician and Petty Officer 2nd Class in the U.S. Navy, believes the stole is a great way to honor the veteran students who are receiving a college degree.

“It’s a way for the university to give back and to show appreciation,” Chavez said. “When the veteran walks across the stage, they feel honored with the stole. It’s a great accomplishment for any student to graduate, especially a veteran.

“I spoke to one vet and he said, ‘this is going to put everything I’ve done in my life into perspective,” Chavez said. “’It made me think about everything I did in the military and what I had to sacrifice for this moment.’”

Sam Houston State University’s School of Music will host a Baroque ensemble concert on Tuesday, May 2, at 7:30 p.m. in the Gaertner Performing Arts Center Recital Hall.

The group performing is the SHSU Center for Early Music Research and Performance (CEMRAP) Vocal and Instrumental ensemble, under the direction of assistant professor in the School of Music Mario Aschauer.

The concert will celebrate the 450th birthday of Claudio Monteverdi. Six of the pieces that will be performed by the students were composed by Monteverdi.

“Monteverdi was one of the inventors of opera,” Aschauer said. “Like Mozart and Verdi he deserves a place among the most powerful dramatists in music history. It is not very often that Monteverdi’s music is performed on our campus, especially with a historically informed performance approach.”

The School of Music’s new organ will also be featured in the program.

The concert is free admission and open to the public.

School Of Music Honors Recital Set For May 4

“The awards and scholarships presented at this recital are hand-selected by faculty and student organizations,” said director of the recital and School of Music professor Scott Plugge.

The recital is free admission and open to the public.

Talent Management Training Set For May 17

A new talent management training, Legal Issues in Internships, will be presented on May 17 from 9-10:30 a.m. in College of Humanities and Social Sciences Room C070.

After the training, attendees will be more aware of any legal issues needing consideration before, during and after the affiliation agreement has been created.

Attendees will also be aware of any resources needed if other questions arise in the agreement creation process, and during and after the internship is complete.

To find the training on talent management, use the keywords “Legal Issues in Internships.”

The registration deadline is May 17 at 8 a.m.

Suicide Awareness Event Set For May 2 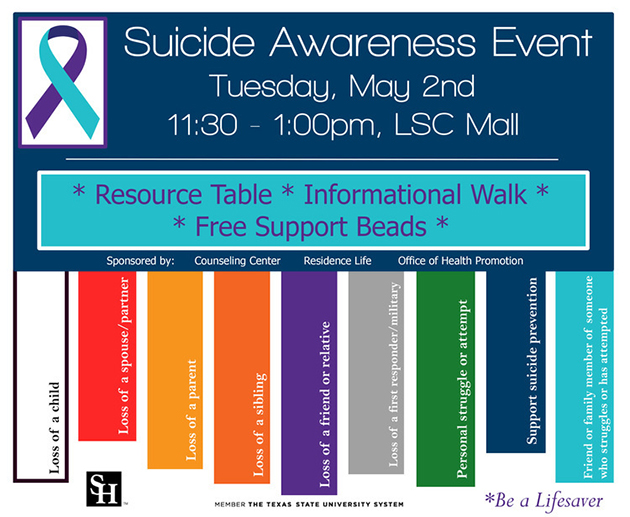 Resources and information on suicide prevention will be provided to attendees. It’s also an effort to bring awareness and support those affected by suicide.

For more information about this event, contact the Counseling Center at 936.294.1720.

The SHSU Experts Guide was established as a resource for the media, who turn to university experts lists for potential interviewees for news stories. Faculty who are interested in being a part of the university's database of experts can submit their biographical and personal information, as well as their areas of expertise, through the Experts Guide Submission Form.

Other story ideas, both news and features on faculty or student research and accomplishments can be sent to today@sam.edu. For news stories, please include the date, location and time of the event, as well as a brief description and a contact person.

To see a full list of the Today@Sam submission guidelines, or to access submission forms for news and feature stories or hometown releases, visit the guidelines page.