Animation Students To Go ‘Beyond The Pencil’ With Disney Veteran

Ron Husband, a former animator with Walt Disney Animation Studios, will give students at Sam Houston State University a behind-the-scenes look at Disney “magic,” with his lecture “Beyond the Pencil” on April 6.

Hosted by the SHSU Department of Art, the presentation will begin at 6 p.m. in the Academic Building IV Olson Auditorium, in Room 220. The event is free and open to the public.

Husband, now retired, worked at Disney for 38 years, starting out as an animation trainee in 1975 and later climbing the ranks to become the first African American animator and supervising animator for Walt Disney Studios. 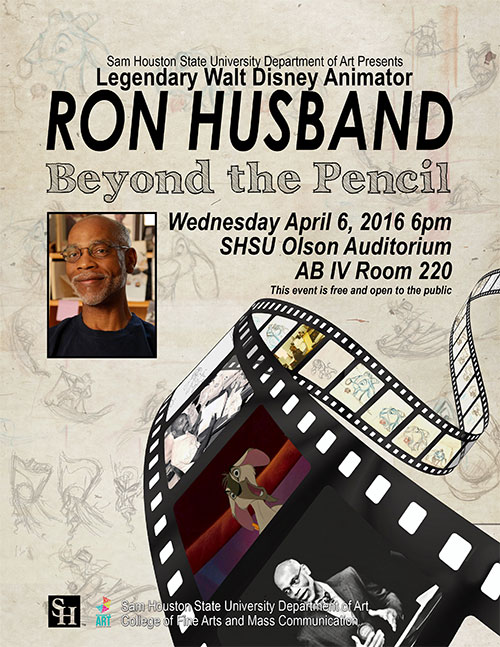 Assistant professor of animation Willie Williams first met Husband at the annual CTN Animation eXpo in 2013 and has since developed a friendship with the legendary artist.

Williams invited Husband to make his first trip to Huntsville to visit with the next generation of artists and animators.

“I think it will be a truly rewarding experience for anyone who attends,” Williams said. “I’m really excited, he’s excited and the students of animation can’t wait for him to get here. I think everyone can benefit from it, regardless of your major or discipline.”

During his tenure at Disney, Husband worked on numerous films including “Beauty and the Beast,” “The Lion King,” “Aladdin,” “The Little Mermaid,” and many more. In addition, Husband also has worked on movies outside of Disney, as well as music videos, and has illustrated children’s books and magazines.

In addition, Husband has taught animation classes and workshops internationally and recently authored the book “Quick Sketching with Ron Husband.”

“When [Husband] applied for Disney, who knew he would turn out to be an animator, a supervising animator, an author years later?” Williams said. “He had no idea. He just saw an ad, applied and that’s how his journey began. But so many things came out of that one little position he was initially applying for. I want the students to gain something from that. No matter how small something may seem, something big can come out of it.”

During his visit to SHSU, a group of animation students will receive a private lecture and demonstration with Husband, during which he also will review some of their work.

“They get feedback from me all the time,” Williams said. “It’s going to be nice for them to get their work looked at by a fresh set of eyes from a professional veteran. I think it’s going to probably be the most valuable advice they’re going to get, and I wouldn’t be surprised if [Husband] keeps in contact with those students in the future.”

For his evening presentation, Husband will discuss his career, life and art. Williams said he suspected that Husband also could discuss changes he’s seen in the industry over the last several decades and may even sign autographs for anyone with paraphernalia pertaining to his work.

"I am excited to meet an amazing Disney animator who has been an inspiration of mine before I even knew who he was,” senior art major Shelby Tedder said. “He has worked on so many great characters from my childhood and he has so much knowledge to offer. I want to take full advantage of him being here to learn all that I can from him."

Students in the SHSU Department of Mass Communication also will be involved with the event, as associate professor Tom Garrett hand picked a team of students in the film program to document the visit and create a video for the animation program.

“Allowing film students to participate and document this world-class workshop is a great opportunity,” Garrett said. “The education and outreach this program and speaker series lends itself to is unparalleled.”