The 58-year-old event, known as “the state’s oldest jazz festival” will take place in the Gaertner Performing Arts Center’s Payne Concert Hall over the course of two days, April 1-2. 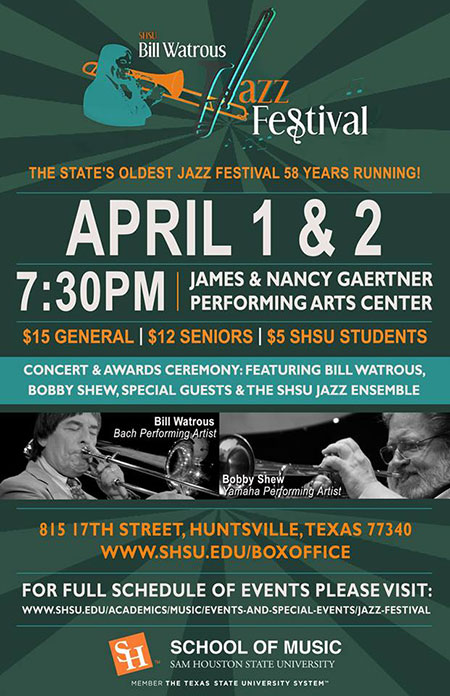 This year’s “featured artist,” Shew is a Grammy-nominated trumpeter who has not only performed as a soloist but also with musical groups, big bands and pop stars.

During his tenure as a musician, Shew has recorded music for the soundtracks of many television shows and films, hosted his own weekly television show, produced and recorded several award-winning albums, and has even done some acting.

Like Shew, Waltrous, has also had a lengthy career as a musician, serving as a band leader, studio musician and performer with a wide-variety of musical groups. Waltrous, a trombonist, was also a key player in publishing “Trombonisms,” an instructional manual for other trombonists.

During the festival, each band will perform at 30-minute intervals and will receive critique sheets on which they will be assigned division ratings. At the award ceremony concluding each days’ events, outstanding musicians and soloists will be recognized as well as first, second and third place within each of the three categories of education.

Although jazz is considered “the American art form,” due to changes in the music industry, the genre now only makes up less than 1 percent of all music sales in the United States, according to Aric Schneller, festival coordinator, conductor of the SHSU Jazz Ensemble and director of jazz studies at SHSU.

“Jazz is alive in the educational system, but these kids don’t have the kind of experiences that Bill had when he was growing up,” Schneller said. “To have him associated with us and our festival will bring that to them, so that he can share those experiences, the stories, just his presence, so that when they go out in the world and hopefully they get those chances, as few as they are, they’ll have that connection.”

Competition performances for the jazz festival that will take place throughout the two days are free and open to the public starting at 9 a.m. Tickets to the finale concerts each evening at 7:30 p.m. can be purchased through the GPAC Box Office.