Sam Houston State University is proud to support our approximately 670 current student veterans and active-duty military who serve and have served in the military. This November, as SHSU observes Veterans Day, we thank the campus vets that have exemplified the motto, “The measure of a Life is its Service,” in our Salute to Service Series. 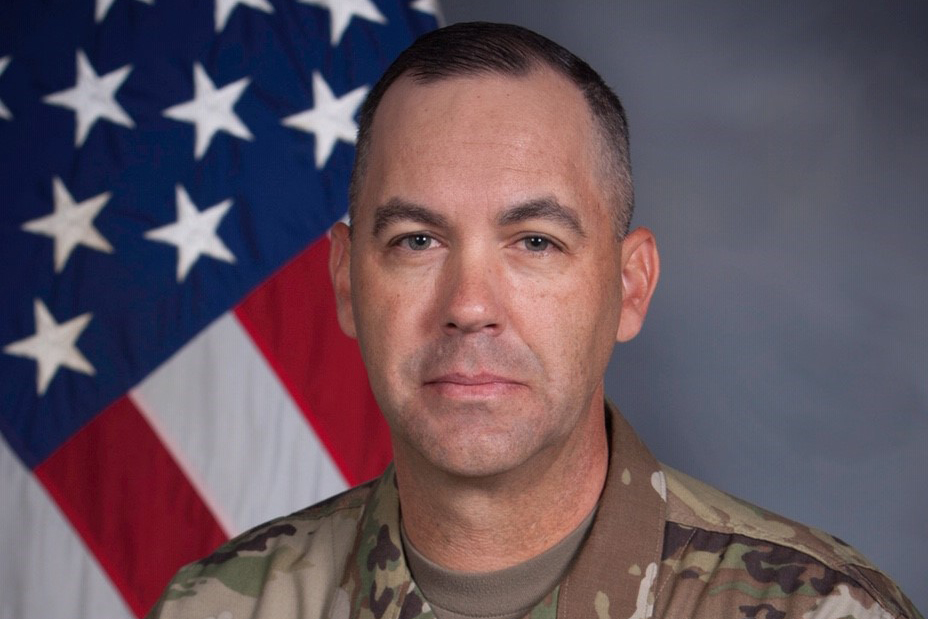 Barton is the senior enlisted advisor to the Deputy Assistant Secretary of the Army (Equity & Inclusion), the Army’s senior Equal Opportunity Program sergeant major, and pursuing Master of Education in curriculum and instruction while working at the Pentagon. He has been stationed or deployed in Iraq, Afghanistan, Guantanamo Bay Cuba, Hawaii, Germany, Fort Hood, Fort Knox, Fort Bliss, Fort Belvoir, Los Angeles, and Macedonia.

Bischoff is an integrated studies major and a United States Army veteran. Upon joining the Army in 2009, he served as a combat medic doing everything from front lines battlefield trauma care to healthcare administration. He was also a non-commissioned officer (NCO). He was stationed in Fort Hood, deployed to Iraq in 2010-2011 and deployed to Afghanistan in 2012-2013. 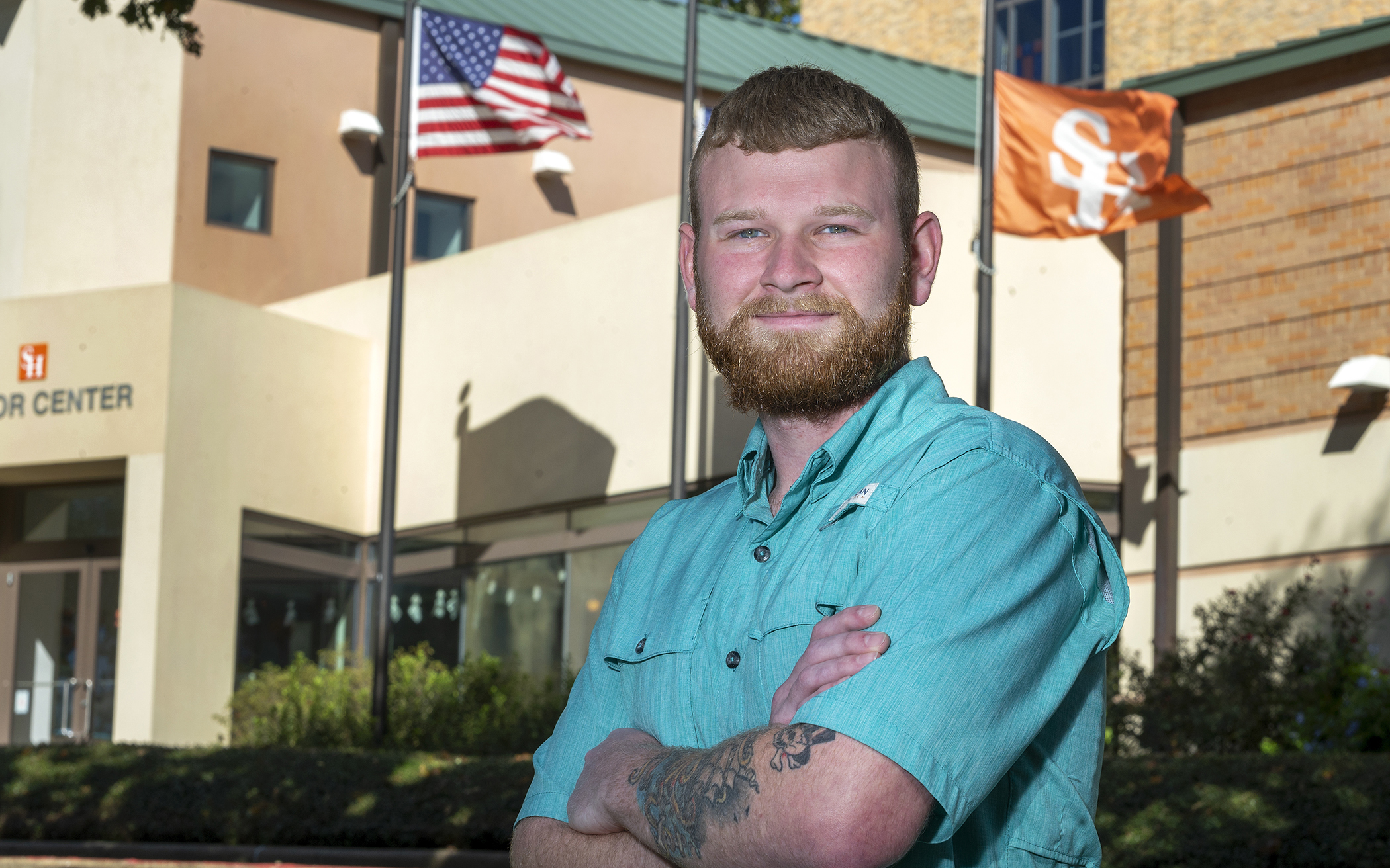 Baldwin is a pre-nursing major and a United States Navy veteran. He served as a Navigation Electronics Technician (ETV) working on submarines. It was his responsibility to design and prep navigational plans, as well as operate while underway to ensure ship safety. During his three years of service, he was stationed in Groton, CT, Pearl Harbor, HI, and Kittery, ME. 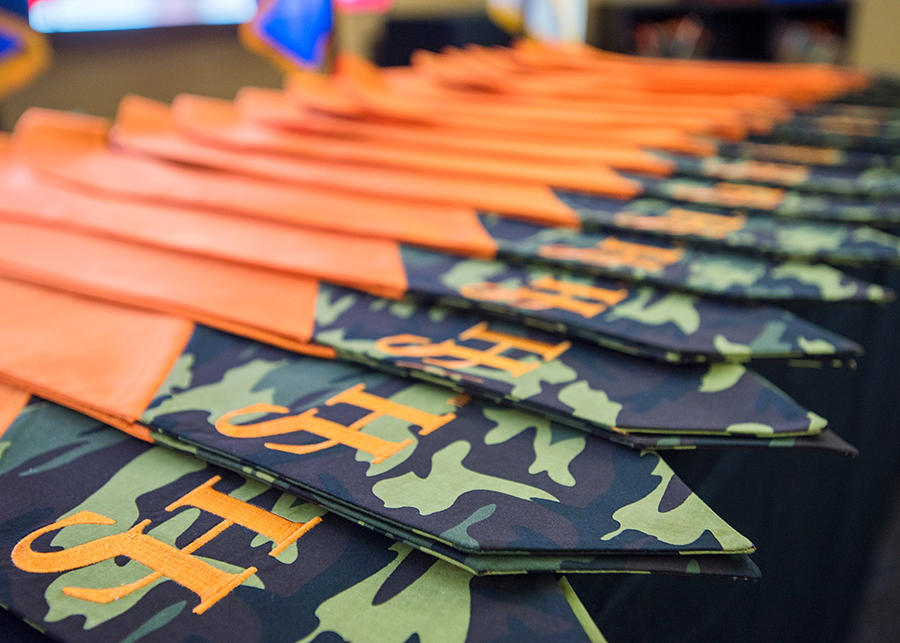 Serving Those That Served

Named in honor of a Texas legend’s heroic service to our country, Sam Houston State University has a long history of supporting those in uniform, and has earned a strong reputation for being a military friendly campus, including receiving nationwide attention as one of the best schools in America for veterans.

Blume is a senior international business major and a United States Army veteran. He worked as an 11B-P Infantry (rifleman and SAW gunner) and bomb dog handler. During his time in active duty, he served two tours in Afghanistan, was stationed in Fort Benning, Georgia for training and airborne school, and was a member of the 4th Infantry Division at Fort Carson, Colorado and 82nd Airborne at Fort Bragg, North Carolina. 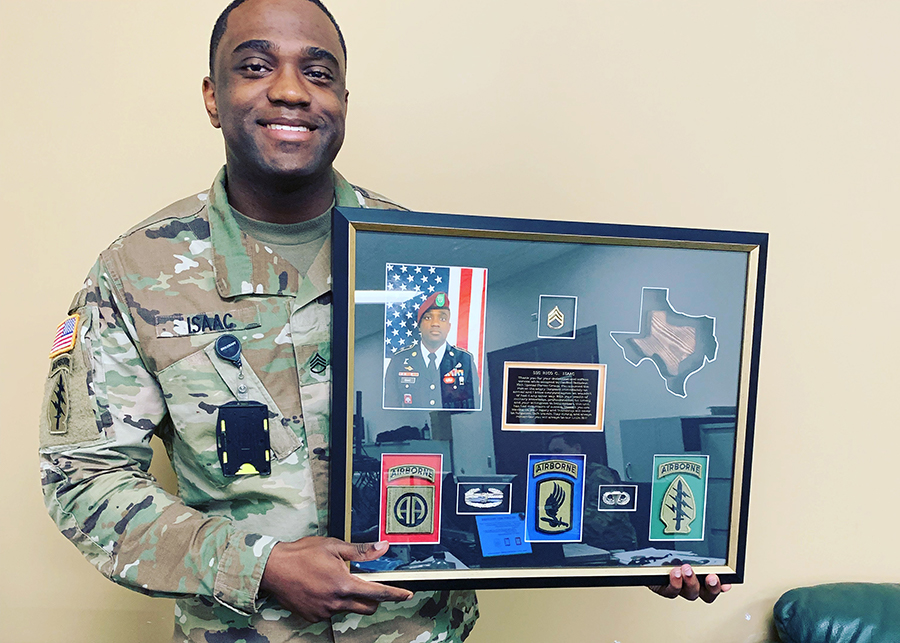 Isaac is a sophomore pre-nursing and public health major and a United States Army veteran. He served as a Military Intelligence Analyst and deployed three times to Afghanistan. He was also stationed in Georgia, Arizona, North Carolina, Germany, Estonia, England, Colorado and completed many small tours to other locations.

Pena is a sophomore criminal justice major and a United States Marine Corps veteran. During his time in the Marines, he served as a technician doing small arms repair. He was stationed with the Marine Corps Security Force Regiment and toured Rota, Spain and Yokosuka, Japan. He also lived in Norfolk, Virginia.

Sheppard is a senior marketing major and a United States Marine Corps veteran. He served in the Infantry as a machine gunner for a quick reaction force. During his time in the Marines, he was deployed to Afghanistan and the Western Pacific. Sheppard was also stationed in Twentynine Palms, California under the command of the 1st Battalion 7th Marines.

Yates is a junior healthcare administration major and a United States Marine Corps veteran. He served as an intelligence analyst and was stationed in Hawaii under the command of the 3rd Battalion 3rd Marines. During his time in the service, he went on two forward deployments to Japan, South Korea and the Philippines.

Maze is a senior engineering technology major and a United States Navy veteran. While in the Navy, he worked as an Aviation Boatswain’s Mate of Equipment and an Aviation Electronics Technician. He served two tours in, Coronado Island, California and in Bremerton, Washington. 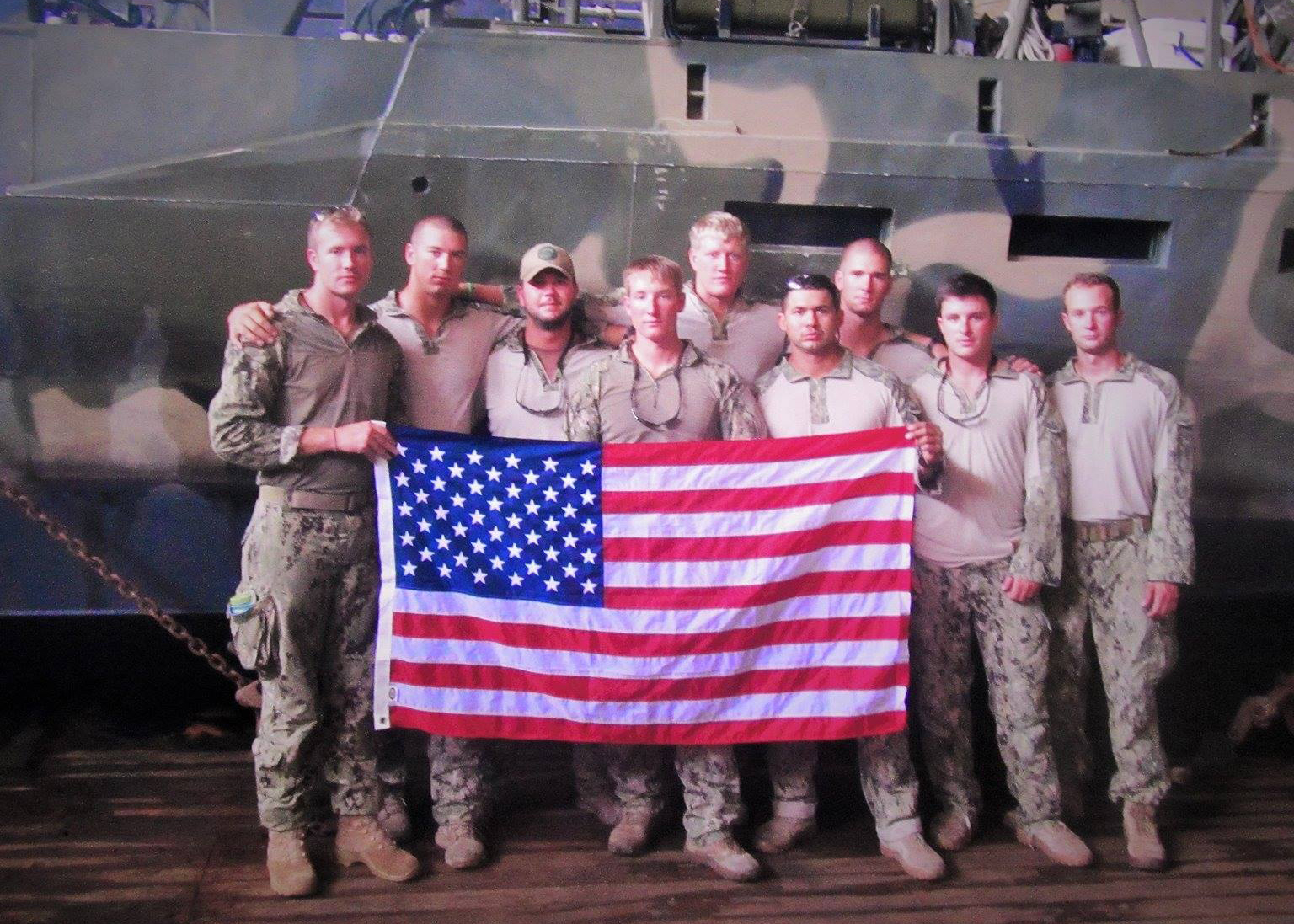 Gvist is a senior marketing major at Sam Houston State University and a veteran of the United States Navy. While in the Navy, Gvist held positions as military police (MA) and a machine gunner on Riverine Command Boats. He was deployed to the Middle East in 2014 and also lived in San Antonio, Texas; Everett, Washington and Virginia Beach, Virginia while in the service.