This article originally appeared in Today@Sam on March 31, 2017. Read the original article by Teddi Cliett.

Senior Sam Houston State University music major Tyler Bordelon describes himself as a nobody from Huntsville, Texas. The judges from the international Great Composers Competition would disagree.

Recently, Bordelon was awarded first place in his age group in an online competition hosted in honor of composer Frederic Chopin’s 207th birthday. Bordelon submitted a video performance of a marimba transcription of one of the Chopin preludes, which he recorded last semester for his senior recital.

The percussionist said he wanted to submit something for the competition, but because he balances school and teaching at two area high schools, time was not on his side to relearn the piece, which originally took him a year of rehearsal time to perfect. 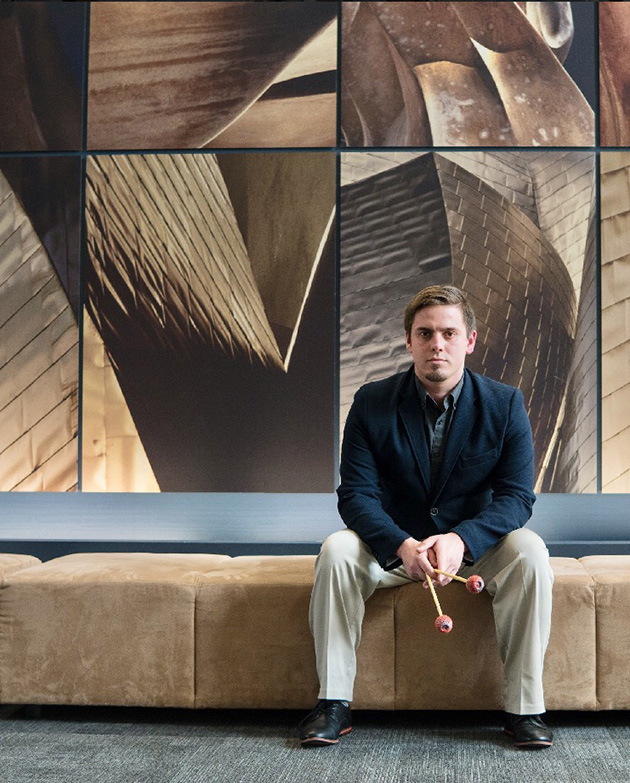 Al-Rickaby pursued a degree in education at the University of Babylon, one of the most highly regarded universities in the Arab world. Even with the lack of essential learning necessities required to complete a higher-level education, he never gave up.

“There was no modern technology or modern teaching methods,” he said. “However, I successfully completed my studies, despite the absence of resources.”

After obtaining his degree Al-Rickaby decided to compete for a spot in the Fulbright Foreign Language Teaching Assistant program. The FLTA allows young educators to gain experience and polish their teaching skills as teaching assistants in foreign language classes at various colleges and universities in the U.S.

“Music is like working out,” Bordelon said, in reference to his submitted piece. “If you don’t work out for a week, you get kind of rusty at it, and I hadn’t played that piece in a good month or so. I could have relearned it, but I just didn’t have time. That was the best recording I had, and I was still worried it wouldn’t be good enough.”

To his surprise, he came out on top.

“I was kind of baffled,” Bordelon said. “I was like, ‘Are you serious?’ I’m some nobody from Huntsville, Texas, so I was kind of taken aback, but I was really honored.”

Bordelon was first introduced to percussion when he was entering the sixth grade, and even though he struggled with severe dyslexia as a child, reading music came as naturally to him as taking a breath of fresh air.

“I remember going into sixth grade thinking I wanted to do band,” he said. “What kid doesn’t want to be a drummer? Music was always one of those things that even though I couldn’t read very well, my brain could somehow process music notes like normal.”

As he studied percussion further, he learned how to play basically any instrument that produces music through impact. Although he has a collection of instruments to choose from, Bordelon said he prefers the marimba, which consists of wooden bars that, when struck with mallets, produce a variety of diverse sounds.

“I’ve always been the best at the marimba, and I feel like you can do more with that than say a drum set,” he said. “Drums tend to always sound the same, and with a marimba you can play pretty much anything on it. It’s not as limited.”

The now award-winning musician says he might compete again next year if he has the time, but mainly wants to express his passion for music and his admiration for the educators who supported him throughout his adolescence by becoming a music teacher and band director after graduation.