This article originally appeared in Today@Sam on January 30, 2017. Read the original article.

Johann Sebastian Bach once said, “it's easy to play any musical instrument: all you have to do is touch the right key at the right time and the instrument will play itself.”

For Sheryl Murphy-Manley, professor of music at Sam Houston State University, the quote from one of her favorite composers can be applied to her life. But the instrument that she touched was that of teaching, and soon after, it began to play its sweet melody.

“I love teaching, whether it be flute or music history, classroom or one-on-one,” Murphy-Manley said. “It created a curiosity in me. With music history, it’s never ending, there’s always something more, even if it’s in a library, manuscript or buried in someone’s attic. That curiosity compelled me to earn a Ph.D. in the field. I thrive on the curiosity of students, and when they become curious I don’t feel burdened even if I have many classes to teach.” 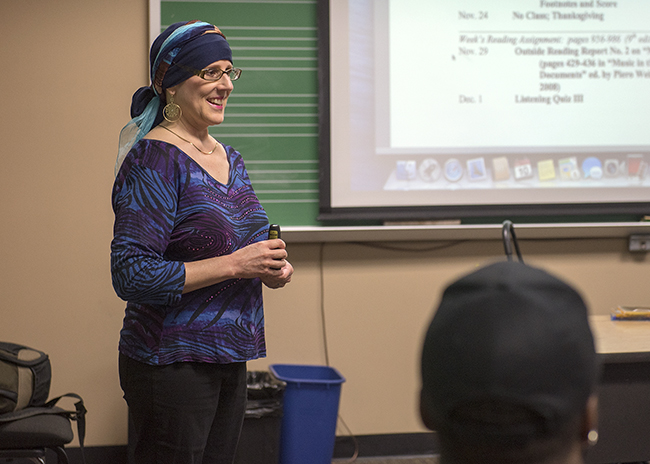 Despite losing her voice after being diagnosed with stage IV breast cancer more than a year ago, music professor Sheryl Murphy-Manley continued to share her passion for the field by continuing to teach. Last year, her dedication was awarded with SHSU's "Excellence in Teaching Award." —Photos by Michael Ray

Murphy-Manley graduated with a bachelor’s degree in music education and a master’s degree in conducting from SHSU, and she later attended the University of Texas, where she received a Ph.D. in musicology.

During her time as a student, Murphy-Manley realized that teaching was her calling and was something that she found her passion pouring into.

“When I started teaching private flute lessons, probably around 1984, I realized it was so rewarding to see a student achieve something,” Murphy-Manley said. “At UT I got to teach a large class of 120 non-music majors; with them, you have to reword everything, and I found it really invigorating that you couldn’t just drop the term ‘dominant or tonic.’ I had to find a way to reach these students and it was exciting. After that, I decided I had to teach.”

“If I can stand, which some days I couldn’t, but if I could get here, I was going to be here to teach... There’s an old story about people complaining about the load they had in life and realizing that it could be much more. I feel that way, even with this terminal cancer.”

At SHSU, Murphy-Manley teaches both sections of the music history sequence for upper-class music majors and a graduate class for research techniques.

“There are so many layers to music history that one can never get bored,” Murphy-Manley said. “If you think about Mozart, for instance, it’s not just his music, but it’s where he lived and what the culture was like when he was living there; how did he respond when he saw the audience, and who was the audience? All the cultural aspects surrounding a composer and the creation of their music are what I find really interesting.

A year ago, Murphy-Manley was diagnosed with stage IV breast cancer and completely lost her voice. But her passion for education inspired her to continue teaching.

“I bought a machine with a headset and would have to whisper my entire lectures.” Murphy-Manley said. “It was even more awkward than it sounds.”

Things got worse in December when Murphy-Manley’s doctors told her that she only had two weeks left to live.

According to Murphy-Manley, 40,000 women die every year of stage IV metastatic breast cancer and between 30 and 40 percent of all early breast cancers will go on to metastasize for unknown reasons. More awareness of the early stages will not prevent this terminal illness.

“I received a quarter dose of chemotherapy and I decided that I was not going to die,” Murphy-Manley said. “I came through the week OK and they kept giving me more (chemotherapy) until I was at a full dose by February.

“During that time I had to decide what is most important to teach my students. Does it lie with the tests? Or is there something bigger I needed to impart on them?” Murphy-Manley said. “I realized what I had been teaching all along was big enough. It gave me a sense of pride knowing that when they talk about the ‘last lecture’ and if you had one more thing to teach your students what would it be- I realized I wouldn’t change a thing.” 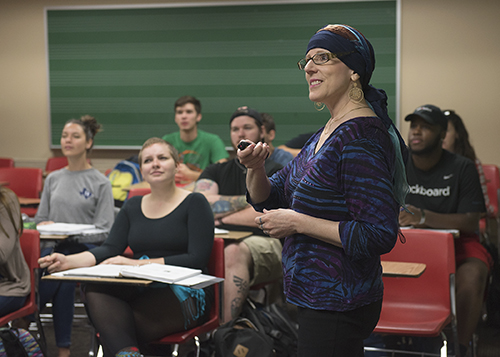 Murphy-Manley utilized technology and her organizations skills, which were cited among her peers in nominating her for "Excellence in Teaching,"to help her teach while undergoing chemotherapy. She teaches this semester.

However, by mid-March, Murphy-Manley no longer had to use the voice projector and wanted to show her students that you can’t give up. She believes that her devotion to teaching is stronger than any circumstance she may face and advocates that more research be done for stage IV breast cancer rather than for the “awareness” pink campaign that is widely popular.

“If I can stand, which some days I couldn’t, but if I could get here I was going to be here to teach,” Murphy-Manley said. “I think that instilled in my students an idea that ‘oh my story of my sneezing is not really enough.’ There’s an old story about people complaining about the load they had in life and realizing that it could be much more. I feel that way even with this terminal cancer.”

Because of her devotion, Murphy-Manley received the SHSU “Excellence in Teaching Award” in 2016. She feels that she is able to strive as a teacher because of her colleagues.

“They’re passionate and I’m passionate, and when we’re brought together we feed each other,” Murphy-Manley said. “It’s very humbling and moving to receive the award.”

Murphy-Manley believes that staying organized, something her colleagues cited, when teaching music history is a necessity because of its broad topics.

“Organization is important when you get to a certain level of knowledge because it becomes overwhelming,” Murphy-Manley said. “I learned music history without electronics so I had to organize everything myself without a computer and so it all just stuck with me."

Teaching also has helped her grow as an individual because she is able to watch the changes in culture.

“I started teaching here in 2001 and the students I had seemed to be less technologically minded, while the students I have now are incredibly technologically minded and they’re incredibly literate,” Murphy-Manley said. “I have to say that I want to defend them and I will defend their generation until I die because they are some of the most hard-working and honest individuals, wanting true justice and liberty. It’s like they’re the fairest generation.

“Before 15 years ago, if a student saw something was unfair it would disappoint them and they would be sad, but if a student saw the same thing today, no unfairness would be accepted,” Murphy-Manley said. “That invigorates me and I grow as a person with hope.”

While Murphy-Manley has instilled many important lessons in her students, she has learned just as much from them.

“I gain more hope watching the students of today fight for fairness and equality, and that extends to the arts, because if you think of all the composers you know, even not being a musician, they’re probably all German men; to be able to incorporate different cultures than just European really creates a mindset that music history wasn’t ready for, but now musicians are opening their eyes to new mindsets. This generation reflects that and it helps me grow in my discipline.”