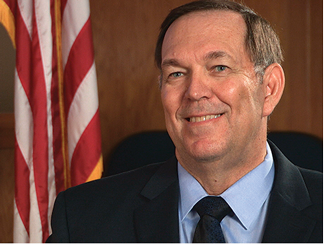 The Honorable Albert “Buddy” McCaig has dedicated his life to service since his days as a student at SHSU. He was commissioned through the SHSU Reserve Officers Training Program as a second lieutenant in the U.S. Army 1972, serving on active duty, and additional 13 years in the Reserves and National Guard. He retired as a major in 1995.

After his distinguished military service, he pursued a career in the legal field, serving as assistant district attorney and in private practice until 2007, when he was appointed by Gov. Rick Perry to his current position as District Judge of Waller County.  Since his appointment, he has been re-elected three times.

He was one of the original group of ROTC alumni from SHSU who met and pooled resources to provide scholarships for Bearkat military science cadets, and he was instrumental in establishing the SHSU Military Science Alumni Club.

He continues to support the military science department at SHSU as a mentor to ROTC seniors who will be in the U.S Army Reserves upon graduation.

He and his wife, Kitty, who also attended SHSU, are the parents of two grown children, Amanda and Donald. McCaig is a Life Member of the SHSU Alumni Association.