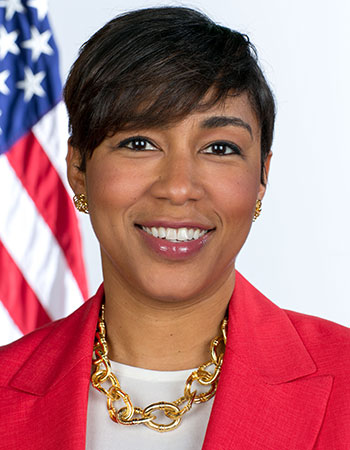 In an era in which any or all activities by a government official may be plagued with scandal or embarrassment, SHSU alumna Ashley Etienne Stephens has worked behind the scenes to manage the communications efforts on some of the country’s most pressing public policy issues and national political campaigns for the nation’s top elected officials.

Since 2014, Stephens has served as the special assistant to President Barack Obama and White House communications director for the cabinet.

In this role, she coordinates press operations and media outreach among the White House, federal agencies and departments and the people who run them, as well as keeping tabs on news stories or developments coming out of the departments that the White House might consider embarrassing or troublesome, according to Washington Post writer Ed O’Keefe.

Stephens, a 2000 SHSU graduate, is no stranger to the political realm. She previously served as deputy communications director and spokesperson for House Democratic Leader Nancy Pelosi (D.-Calif.), overseeing communications strategies on such topics as immigration reform, raising the minimum wage, and Pelosi's "When Women Succeed America Succeeds" policy initiative, created to draw attention to economic issues affecting women and families.

"She’s been integral in the formulation and rollout of our women’s economic agenda, regional strategy on immigration reform, and many other critical initiatives," Pelosi was quoted as saying about Stephens.

Before working for Pelosi, Stephens previously served as communications director for House Democrats on the oversight and government reform committee, led by ranking member Elijah Cummings (D-Md.) from 2011-2013. In that position, she was responsible for leading the communications response to congressional investigations targeting the administration on issues such as the September 2012 attacks at the U.S. diplomatic outpost in Benghazi, Libya, as well as on the ATF’s botched gun-running operation “Fast and Furious.”

Stephens also has served as a spokesperson for the Corporation for National and Community Service; in communications roles for Texas Congressman Al Green and former Congressmen Chris Bell and Ken Bentsen; and was a spokesperson in Virginia for President Obama in 2008.

At SHSU, she was the recipient of the Sammy Award for “Outstanding Sophomore Leader” and the McDermett Memorial Award for outstanding female senior. She also was the vice president for the Kappa Mu Chapter of Delta Sigma Theta sorority.