A Promising Natural Resource for SHSU: The Center for Biological Field Studies

There’s actually no fish hatchery these days at the end of Fish Hatchery Road, just east of Huntsville.

But where one used to be years ago, Sam Houston State University’s Center for Biological Field Studies (CBFS) is now poised to make use of the old hatchery acreage for a wide variety of biological research studies, experiments, and observations. 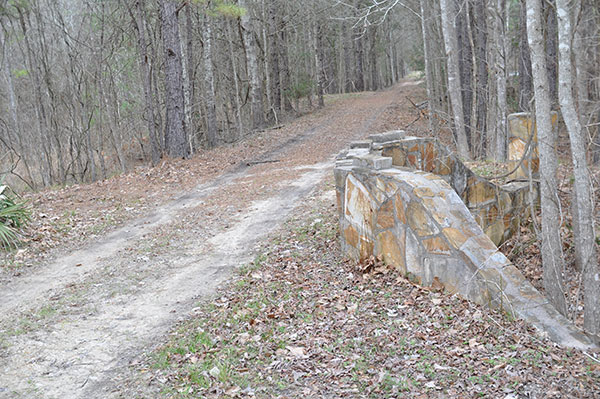 The facility that hosts the CBFS was built in the 1930s as Texas’ state fish hatchery. Like many other public buildings and facilities constructed in those years, the fish hatchery was a federal Works Progress Administration (WPA) project. The hatchery contained 39 fish tanks or ponds, fed by a nine-acre lake on Harmon Creek, which runs through the middle of the site. (The dam that created the creek was destroyed in a storm about 20 years ago, removing the lake that was the water source for the ponds, and thus forcing the closure of the fish hatchery). Some of the original WPA structures are still visible today, including a small stone bridge (above), the pits that were once ponds, and the berms separating them.

About a decade ago, after another location near Athens was chosen for a new fish hatchery due to environmental and archeological issues involving the old property, the land – overgrown and in a relatively undeveloped state – was signed over to Sam Houston State University’s Department of Biological Sciences.

Alan Byboth, M.S., manager of the CBFS since arriving in May 2013, is determined to help SHSU faculty in the university’s Department of Biological Sciences make the most out of what the field station has to offer. One of the first steps in realizing the potential of the 250-acre site, Byboth noted in a recent interview, is to conduct a complete inventory of the plant and animal species living in the CBFS. “I would really like to have a 100 percent inventory here,” Byboth says. “There are only a few places in the U.S. that have a complete inventory of the biota. It’s a large task.” He hopes to begin the project within a couple of months, with help from students or others interested in the field station, so the center can establish a good baseline to use in future analyses of changes in species on the site.

In conjunction with that goal, another early step will be the establishment of a long-term monitoring and measuring program. Ultimately, Byboth hopes to build a full support system for researchers working at the station, create a network of researchers collaborating on studies involving the Piney Woods region of Texas, and involve the CBFS in the global network of biological field stations that are monitoring the overall biosphere. 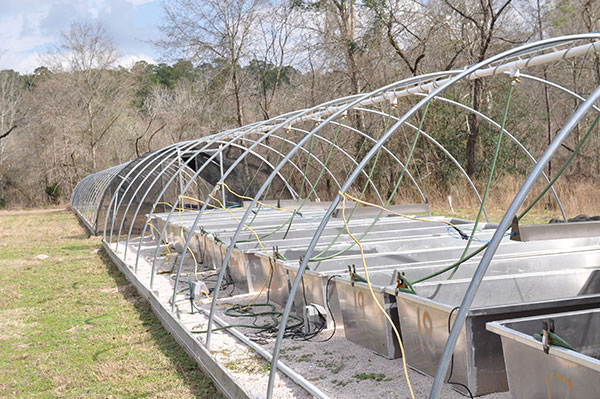 But while bringing the CBFS to full utilization may take a while, a lot of important research work by Department of Biological Sciences faculty is already going on at the station. Department chair Dr. Chad Hargrave, for example, is studying the impact of global climate change on stream ecology, using an aquatic station built in the southern part of the station acreage. Dr. Hargrave’s experiment (left) involves groups of tanks filled with flowing water with varying conditions – some containing predators and some without them, some that are slightly heated and some that are not. The experiment then analyzes the differences in each microenvironment, such as amount of algae growth and the feeding behavior and metabolism of fish introduced into the various tanks. Dr. Hargrave did an initial experiment run in the summer of 2013, and is preparing for a second run in the near future.

Another faculty member, entomologist Dr. Sibyl Bucheli, is studying the insects that are attracted to the human and animal bodies placed by the Southeast Texas Applied Forensic Science Facility (STAFS), also located on the CBFS grounds. Dr. Diane Neudorf, an ornithologist, has been studying the nesting behavior of the Carolina wren for eight years now, using birdhouses and other equipment distributed across the CBFS grounds. Dr. Bill Lutterschmidt has conducted studies on reptiles native to the area, and Dr. Monte Thies has similarly worked with mammals.

Researchers from other universities are also taking an interest in the CBFS. One team from Rice is studying frog eggs, and another Rice scientist is examining an endangered grass species planted on the property, in an effort to establish its historical range.

Center manager Byboth hopes to see CBFS activities involving undergraduate and graduate students, as well as SHSU faculty members, increase to the point where research and observations are daily activities at the Center. “We’d like to develop educational opportunities that are relevant and unique to CBFS,” he says, “as well as programs that enrich our fellow citizens’ lives and address Texas employers’ future recruitment needs.” By expanding educational and research programs at the field station, Byboth and department faculty hope to “promote discoveries that will help us all live compatibly with the natural world.”

Meanwhile, in the short run, CBFS hopes to address a couple of more humble but immediate needs: a public restroom and Internet access! Those two items – especially the former – will make it easier for students and others to spend more significant amounts of time at the field station.

Byboth hopes that by the coming summer, CBFS will be able to host a few intensive field courses for SHSU students. Field stations like CBFS provide an opportunity for short, day-and-night courses, taught completely on the site, which involve specimen collection and examination. Such courses will provide students with hands-on, real-life experience under the mentorship of SHSU faculty experts in fields as diverse as herpetology, botany, entomology, and ecology. 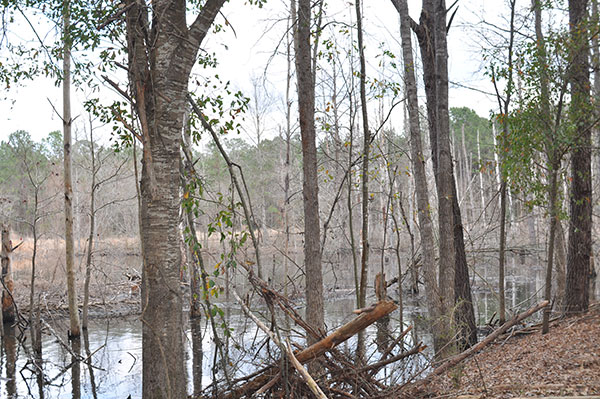 So the work of SHSU’s Center for Biological Field Studies is just beginning… and with it a chance to enrich the diversity of plants and animals on the property, and to restore and propagate wild East Texas populations that are locally extinct. The field station represents an outstanding resource for the Department of Biological Sciences, the university as a whole, and – ultimately – the surrounding community.