The SSP Program is very fortunate to have such tremendous core and affiliate faculty members. They are an important part of what makes our Program great, and we’d like to tell you a little more about them:

Dr. Justin P. Allen grew up living in the small farming community of McCune, KS and the larger metropolitan area of Shreveport, LA. After graduating from Southeast High School in Cherokee KS, he attended Kansas State University where he earned a Bachelor of Arts in Psychology. While completing his course work towards a Masters of Arts in Psychology (2008) at Washburn University, Dr. Allen began developing an interest in school-based psychological services.

In 2016 Dr. Allen completed his doctoral work in School Psychology at the University of Kansas (KU). While at KU, he worked with Drs. Daryl Mellard and Don Deshler in investigating middle school practices in implementing school-wide academic assessment and intervention methods at the Center for Research on Learning (CRL). While completing his doctoral studies, Dr. Allen worked as an applied Ed.S.-level school psychologist for the Unified School District (USD) 453 in Leavenworth, KS. During his employment at USD 453 Dr. Allen worked in elementary, intermediate, and high-school settings, and also served as the district’s lead school psychologist where responsibilities included providing supervision to students on internship and serving on difficult or disputed psychoeducational cases.

Dr. Courtney Swisher Banks was born and raised in Austin, TX. After graduating from John B. Connally High School in 2001, she attended Baylor University in Waco, TX where she earned her Bachelor of Arts in Psychology and Minor in Religion in 2005. Upon graduation from Baylor, Dr. Banks obtained her Texas Teaching Certification in the area of Special Education K-12 and moved back to the Austin area to teach Special Education Resource. During this time, Dr. Banks became interested in home and school collaboration to promote social and emotional success in students.

After teaching for two years in Manor ISD, she moved to obtain her Specialist in School Psychology Degree at Texas A&M University – Commerce. As a graduate student, Dr. Banks worked in Royse City ISD as an elementary special education teacher and later became the district’s special education counselor. After completing her Specialist in School Psychology degree in 2010, Dr. Banks moved to College Station, TX to pursue her Ph.D. in School Psychology at Texas A&M University (TAMU). As a graduate student at TAMU, Dr. Banks worked and studied in the Peer Relations and Adjustment Research Lab under her mentor, Dr. Jamilia Blake. In collaboration with the lab team, Dr. Banks researched and published studies relating to anti-bullying prevention and intervention practices, parent socialization of bystander behavior, and child and adolescent aggression. In 2013, Dr. Banks obtained her certificate as a Licensed Specialist in School Psychology (LSSP), and worked in Bryan ISD providing assessment, consultation, and psychological services to students. In 2015, Dr. Banks relocated to complete her pre-doctoral internship in Dallas ISD within the Psychological and Social Services department. While in Dallas ISD, Dr. Banks provided psychological services to students at the elementary and middle school levels. She also worked in the district’s Youth and Family Center and was an active member of the crisis response team. Dr. Banks obtained her Ph.D. in Summer 2016. Her dissertation focuses on the factors that influence what parents teach their children to do as bystanders to bullying.

Dr. Banks joined the faculty of Sam Houston State University (SHSU) in the fall of 2016. At SHSU, Dr. Banks teaches both undergraduate psychology and graduate school psychology courses. Her primary research interests are centered around home and school collaborations on tiered behavioral interventions, with additional interests in factors that influence parental involvement in late elementary and secondary school, parent socialization, and aggression in youth.

Dr. James W. (“Jamey”) Crosby is a native southeast-Texan, raised in Kountze, TX. After graduating from Kountze High School in 1997, he attended Abilene Christian University (ACU) in Abilene, TX, where he earned he earned a Bachelor of Science degree in Psychology (2001) and a Master of Science in School Psychology (2004). While working on his graduate degree at ACU, he developed a keen interest in rural psychological service delivery, completing his school psychology practica and an internship with the Taylor-Callahan Education Cooperative in rural West Texas.

Immediately following the completion of his M.S. degree at ACU, he began his doctoral work at Oklahoma State University (OSU; Stillwater, OK) in School Psychology. While at OSU, he worked in the research labs of Drs. Gary Duhon and Eric Mesmer on contemporary applications of behavioral and academic consultation in school settings, the lab of Dr. Judy Oehler on peer victimization, and in the OSU School Psychology Center for two years, providing psychological services to surrounding communities and schools.  He completed his pre-doctoral internship with the Institute of Clinical Training and Research at the Devereux Foundation (Villanova, PA), specializing in the clinical treatment of trauma and disruptive behavior disorders in adolescent females.

Dr. Crosby earned his Ph.D. in the summer of 2008 and joined the faculty of the psychology department at Sam Houston State University (SHSU) that fall.  At SHSU, Dr. Crosby teaches courses primarily within the school psychology program, including courses on behavioral interventions, academic consultation, counseling, and psychopathology. His research interests lie in two areas: psychosocial outcomes for victims of bullying and the psychology of religion and spirituality.

In his free time, Dr. Crosby enjoys spending time with his family, listening to music, practicing drumming, and reading about religious history. He is an avid jazz enthusiast.

Several years of professional work experience followed Dr. Noland’s pre-doctoral internship at the Tennessee Internship Consortium in Professional Psychology, including work as a school psychologist for the Clermont County Educational Service Center in Batavia, OH, and Montrose County School District RE-1J in Montrose, CO. Dr. Noland began work as an Assistant Professor of Psychology at SHSU in the fall of 2003, and assumed the role of SSP Program Director following her tenure and promotion to Associate Professor in June, 2010.

Dr. Noland’s current areas of research interest are centered broadly on the practice of school psychology and specifically focus on testing and assessment practice and pedagogical concerns. Dr. Noland has been a long-time instructor of the undergraduate Human Sexuality course, and as an extension of this experience has developed a broad interest in topics of investigation dealing with sexuality, sexual orientation, and gender identity.

In addition to professional roles and responsibilities, Dr. Noland enjoys personal pursuits that include spending time with her family, running, and reading for her monthly Book Club.

Dr. Amanda Venta spent her childhood in Illinois before moving to Houston, where she completed high school at Duchesne Academy of the Sacred Heart (2005). She graduated from Rice University in 2009 with a Bachelor of Arts degree in Psychology and Religious Studies. While working towards her undergraduate degree, she was selected for an internship allowing her to work in the residential treatment program at DePelchin Children’s Center. There, she developed an interest in adolescent mental health, which led her to pursue a research assistantship at the Adolescent Treatment Program of the Menninger Clinic the year following her graduation.

In 2010, Dr. Venta began pursuing a doctorate in Clinical Psychology at the University of Houston (UH). Throughout her training, she secured research assistantships mentored by Dr. Carla Sharp in UH’s Developmental Psychopathology lab. Her dissertation research examined the effect of oxytocin on trust between adolescents and their mothers and was funded by the National Institutes of Mental Health (PI: Venta). This project built upon Dr. Venta’s long-standing research interests in adolescent-parent attachment. Dr. Venta’s clinical training focused on children, adolescents, and families, with practicum placements at DePelchin Children’s Center and Texas Children’s Hospital. She also provided psychological services within UH’s Psychology Research and Services Center and in several Houston-area schools. She completed her pre-doctoral internship at DePelchin Children’s Center through the Menninger Department of Psychiatry and Behavioral Sciences at Baylor College of Medicine, specializing in the treatment of children and adolescents.

Dr. Venta earned her Ph.D. in the Summer of 2015 and joined the faculty of the psychology department at Sam Houston State University (SHSU) shortly thereafter. At SHSU, Dr. Venta teaches Child Interventions and Assessment for graduate psychology students. Her primary research interests are the development of psychopathology in youth and the protective effect of attachment security, with additional interests in emotion dysregulation and social cognition. She has received related research funding from the National Institutes of Mental Health and the American Psychological Foundation. She continues numerous research collaborations in the Houston area and has an affiliate faculty appointment at the Menninger Department of Psychiatry and Behavioral Sciences at Baylor College of Medicine.

Dr. Venta enjoys spending time with her family in Houston as well as traveling, trying new restaurants, and walking with her dog, Charlie. 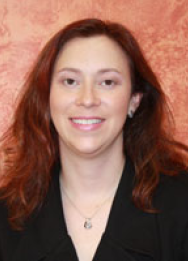