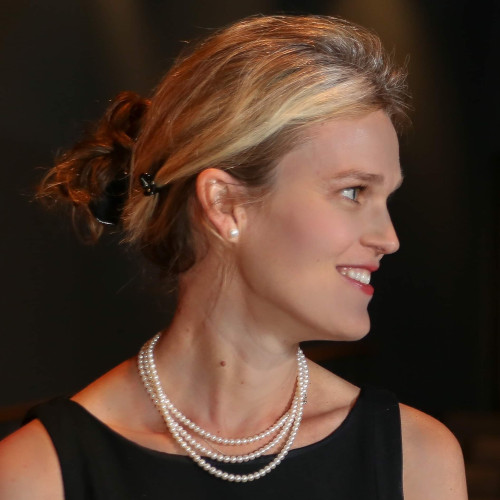 Transylvanian born pianist Dr. ILonka Rus is the Director of Keyboard Studies and Professor of Piano at Sam Houston State University in Huntsville, TX. She began her piano studies with her mother at the age of five in Romania. By the age of ten she had given her first public performance and won her first award at the International Piano Competition “Citta di Marsala” in Italy.

After studies at the Music Academy in Bucharest, Romania, the Texas Christian University and Oberlin Conservatory, Dr. Rus entered graduate school at the University of Houston where she was awarded a Fulbright scholarship and received her Doctoral of Musical Arts degree in Piano Performance, with an emphasis in Piano Collaborative and Chamber Music with a minor in Organ.

She appeared as a recitalist and concert artist with numerous orchestras and chamber music ensembles throughout Romania, Italy, Spain, Germany, Holland and the United States. She has also served as a collaborative pianist for the Fort Worth Ballet Company and for the Texas Christian University in Fort Worth.

In 2007, as a chamber musician, Dr. Rus has appeared in concert with her Romanian Trio (Rodica Oancea Gonzalez and Mihaela Oancea Frusina, Houston Symphony violinists) at Carnegie Hall, in New York.

In the summer of 2008, Dr. Rus gave her Carnegie Hall recital debut in New York and continues to perform and teach piano solo and chamber music master classes in US, Romania, Colombia and Mexico.

Since 2009 Dr. Rus has been a regular guest teacher and recitalist at the International Music Festival in Medellin, Colombia. She continues to perform clinics and adjudicate national and international competitions and is the Vice President of the World Piano Teachers Association-Texas Chapter.

In the fall of 2021, Dr. Rus received the prestigious Kawai Educator Medallion Award and became a Shigeru Kawai Artist.