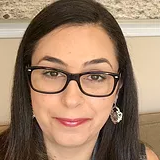 Elisa Herrmann is a filmmaker and video artist from Brazil, with a degree in Art Education, a Specialization in Audiovisual Communication and a Master of Fine Arts in Mass Communication and Media Arts from SIU. In 2008, Herrmann received a Fulbright grant for academically excellent students, which paid for Masters applications in the USA.

In the past years, Elisa produced and directed short experimental films, which were screened at festivals in Southern Illinois. "3 1/2 Minutes" was awarded best editing at the 1st Annual SPC-TV Film and Television Awards (May 2011), and “A Envenenadora” was awarded best experimental film at the 2015 Blaquefyre Independent Film Festival. The artist also produced and directed narrative short films, and "The Gaze" was awarded best narrative short film in the 2011 Little Muddy Media Arts Festival. Elisa Herrmann is also an awarded screenwriter with her short film "Death Expectancy", a dark comedy that deals with loneliness, the elderly, and technological advancements. Elisa's first feature screenplay "The Great Adventure of the Bentley Girls" was awarded first place at the Fan Fiction Film and Writing Festival, and is currently being submitted to other screenplay festivals. Elisa's latest finalized film, the awarded short documentary "Rodrigo Herrman - Life and Works", premiered in Curitiba, Brazil, during the 34th Music Festival of Curitiba, and screened at several international film festivals, including the 2016 Cannes Film Festival - Short Film Corner. Elisa has just finished shooting a feature documentary about the Brazilian religion Umbanda, which is currently in post production.

The Great Adventure of the Bentley Girls

International Graduate Student Scholarship.
Scholarship awarded by the Mass Communication and Media Arts Department at Southern
Illinois University Carbondale for my “impressive overall record of achievement” while
pursuing
the degree of Master of Fine Arts, 2012.

3 ½ Minutes.
Awarded for achievement in motion pictures and media arts in film editing in the 1st Annual
SPC-TV Film and Television Awards, 2011.