The College of Humanities and Social Sciences is pleased to announce the 2016 Wall of Honor Recipients:

The official ceremony for the Wall of Honor was held on Friday, February 19, 2016 at 4:00 p.m. in the CHSS building on the Sam Houston State University campus. A dinner honoring the recipients followed the ceremony. 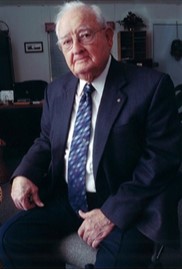 FRANK J. ROBINSON, SR., was born August 22, 1916, on a tobacco farm and raised on a truck farm in Walker County.  Mr. Robinson began his career with Gulf States Utilities (now Entergy Corp.) in 1939 delivering ice. He rose through the ranks to ultimately achieve the title of district superintendent. He earned a Bachelor of Science degree in history from Sam Houston State University in 1955. Mr. Robinson took great pride in his university and had many cherished friendships on campus.

He followed a career path which took him to Cleveland, Texas, and eventually led to jobs as a lineman, repairman and commercial equipment salesman. Mr. Robinson was promoted to manager of the Woodville GSU office and the Woodville-Corrigan territory. He was transferred to Huntsville in 1965 where he served as District Superintendent until his retirement from Gulf States in 1981.

Mr. Robinson ranched, helped found The First American Bank of  Huntsville, and was a top real estate sales person for Homes of Huntsville. Mr. Robinson’s public service career began in 1987 when he was elected as Walker County Judge for two terms.

His lifetime service included serving as board of trustees senior member at Lon Morris College, member of the SHSU alumni board for almost two decades, and president of the Huntsville Rotary Club. Robinson was recognized as a distinguished alumnus at SHSU in 1994; received the TxDOT Road Hand and Mance Park Lifetime Achievement awards; and was a 2007 runner up for the Huntsville Outstanding Citizen of the Year award. For over seventy years Mr. Robinson donned a red Santa suit and passed out candy from a sleigh at parades.

Dr. Fair came to Sam Houston State University in 1972 as an Assistant Professor and is today a full Professor in the SHSU Department of Philosophy. Over the past 44 years, Dr. Fair has actively focused on teaching and student learning through his own teaching, research, and service.

Dr. Fair is one of the few SHSU faculty members to receive multiple  SHSU’s excellence awards, including the Excellence in Teaching award in 1989 and the Excellence in Service award in 1992. In 2011, he also earned the Piper Professor designation from the Minnie Stevens Piper Foundation. This prestigious award honors ten professors across the state for their superior teaching.

Dr. Fair’s accomplishments include the establishment of the SHSU annual Conference on Teaching; the annual Constitution Day celebration; the Honors Program; the Across-the-University Writing Program; and the Academic Challenge Program.

His publications include: Insightful Quality: Beyond Continuous Improvement, “Buddhism, Christianity and Modern Science: A Response to Masao Abe,” and “Socrates in the Schools from Scotland to Texas: Replicating a Study on the Effects of a Philosophy for Children Program,” a project based on a study in Scotland that showed large, durable increases in students’ cognitive abilities resulting from one-hour-per-week structured conversations about topics with a philosophical dimension. He also is the managing editor of the scholarly journal, INQUIRY: Critical Thinking Across the Disciplines.