Charles E. Cheever Jr. presently serves as Chairman Emeritus of Broadway Bank. Charles “Charlie” has been a family businessman almost his entire career. During his time as president, Charlie was the driving force behind much of the growth and expansion of Broadway Bank, a position he assumed in 1961 at the age of 32 after joining the bank in 1957. He worked alongside his father, Colonel Charles E. Cheever Sr., to create an environment of innovation, working to extend the bank’s drive-thru hours and guiding the bank through the hard-hitting recession of the late 1980s, when many banks and financial institutions closed.

Before joining Broadway Bank, Charlie graduated from West Point in 1949, served as an Air Force pilot instructor and then as Lieutenant Colonel in the United States Air Force Reserves. He also earned his Doctor of Jurisprudence from the University of Texas School of Law in 1957.

Throughout his life, Charlie has personally embraced the spirit of giving back to the community, which his parents also instilled into the culture of Broadway Bank. Charlie has served as co-chairman of the San Fernando Cathedral Restoration Project and the Girl Scouts of Southwest Texas Capital Campaign; and as a trustee of the United Way, University of the Incarnate Word, and Southwest Research Institute. He also served on the University of Texas Health Science Center’s advisory board for the Center for Medical Ethics and Humanities. Honoring a family legacy of supporting the space program, Charlie spearheaded the capital campaign for the Challenger Learning Center on the San Antonio College campus. The Star Tower, the most visible feature at the Challenger’s Scobee Education Center bears his name.

In addition, Charlie served as the chairman, contact banker and regional director of the Texas Bankers Association, and as a director of San Antonio Branch of the Federal Reserve. He was the founding co-chairman of San Antonio Education Partnership and chaired many projects and organizations, such as the Greater San Antonio Chamber of Commerce, the San Antonio Economic Development Foundation, the Leadership Division of Forward San Antonio and others – giving his time and expertise to a great many community organizations.

Charlie has six children with his late wife Sally: Suzanne, Cece, Jean, Joan, Charlie and Chris. Following the loss of Sally, his wife of 52 years, Charlie subsequently married Nancy and they began a new chapter in life together.

Marshall Bookman Peters is the former Chairman and CEO of First City Bank of Bryan, Texas, having begun his banking career in 1961. He is a Certified Public Accountant and holds a BBA from the University of Texas and an MBA from Texas A&M University.

Peters has served as a Founding Trustee and Treasurer of the Texas Housing Agency and he formerly was a Director of Gulf States Utility Company as well as an Advisory Director of Entergy-Texas.

Additionally, Peters has served as Chairman of the TAMU Chancellor’s Century Council and was among the founding members. He is a former member of the TAMU System Investment Advisory Committee, served on the TAMU Committee for the location of the George H.W. Bush Presidential Library and currently serves on the Advisory Board of the TAMU Bush School of Public Service. He is a former member of TAMU Mays College Development Council and has been honored as an Outstanding Alumnus of the Mays College of Business. He also was the first Chairman of the TAMU Opera & Performing Arts Society Underwriters and has been recognized by the Brazos Valley Arts Council for his Lifetime Contribution to the Arts.

Peters has been named Bryan/College Station Citizen of the Year and has been selected as a member of the Bryan ISD Education Foundation Hall of Honor. He has endowed Professorships in the TAMU Departments of Finance and History, as well as several college scholarships.

Peters has served fifteen years as a Trustee of the Texas Presbyterian Foundation, and is an Elder in the First Presbyterian Church of Bryan where he and his wife, Florence, are actively involved. They have four daughters and three grandchildren. 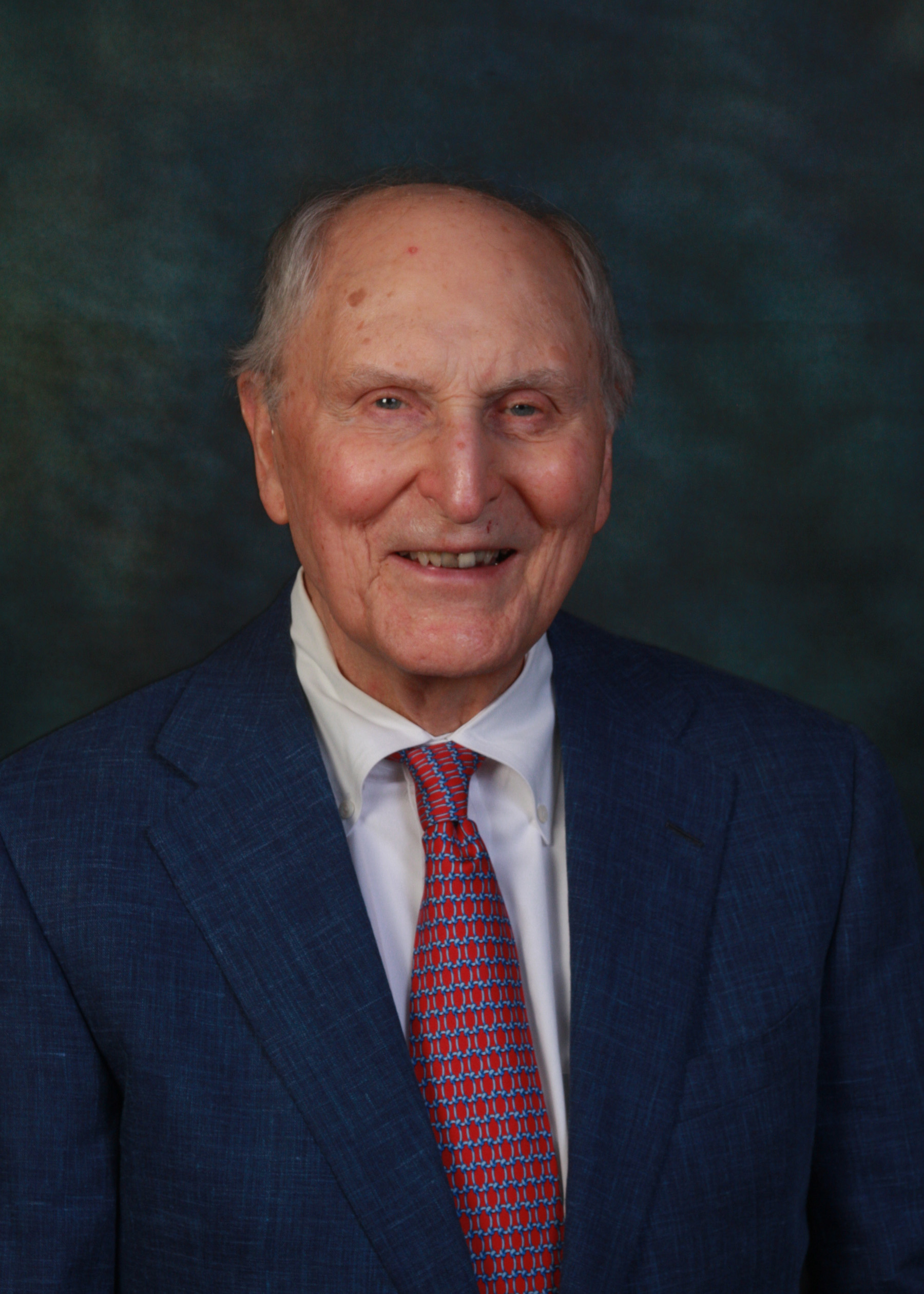 Lowell “Stretch” Smith received a degree from Southern Methodist University in Dallas, Texas. He served in the United States Air Force and worked for the Texas Department of Banking as an assistant bank examiner. In the late 1950’s he returned to Johnson County to join the First State Bank of Rio Vista (the Cowpasture Bank). He became President of the bank in the early 1960’s and was named Chairman of the Board in 1975, and served in that capacity until his retirement in June of 1999 when Wells Fargo/Norwest Bank purchased the Cowpasture Bank.

He currently serves on the Cleburne Economic Development Board, and in the Rotary Club of Cleburne, Texas Health Cleburne Development Council. Some years back, Cleburne Chamber of Commerce awarded the first “Lifetime Achievement” award to Mr. Smith for his community involvement for approximately fifty years.

In September of 2007, the Cleburne I.S.D. Board of Trustees announced they were renaming the Cleburne Middle School to “Lowell Smith Jr. Middle School”. In 2008 the Board of Trustees of Texas Wesleyan University granted Stretch an Honorary Doctorate of Business Administration. Mr. Smith was elected to the Cowboy Hall of Fame by The Western Multicultural Heritage Foundation in 2010. Johnson County Commissioners Court honored Mr. Smith with “Lowell Smith Day” in January 2011.

Mr. Smith and his wife, Shirley, live on Smith Ranch near Rio Vista. They operate the ranch, which was begun by the Smith Family in 1887. They have two children and 3 great grandchildren, and are members of First United Methodist Church of Cleburne.

Terry Tuggle currently serves as Chairman of the Board and Chief Executive Officer of First Community Bancshares, a two bank holding company, Chairman of First National Bank Texas (FNBT) as well as President, Chairman and Chief Executive Officer of Fort Hood National Bank (FHNB). Prior to his affiliation with FNBT, Tuggle served two of the largest and most successful holding companies in Texas (Texas Commerce Bank and Republic Bank Texas). In 2008, the Texas Bankers Association presented Tuggle with the prestigious 50 Years in Banking Award.

Raised in Odessa, Texas, Tuggle received his undergraduate degree in Business Administration from the University of Texas at Austin. He later attended the Southwestern Graduate School of Banking at Southern Methodist University and the National Commercial Lending School at the University of Oklahoma. In 2014, the city of Odessa awarded Tuggle the Distinguished Former Odessan for his professional and civic achievements.

Both FNBT and FHNB have experienced tremendous growth and success under Tuggle’s leadership. Under his guidance, FNBT has grown from a Texas based bank with four bank branches to over 300 banking center locations, forging across Texas, New Mexico and Arizona. Tuggle’s direction at FHNB led the way to the first in-store Banking Agreement with the Defense Commissary Agency which resulted in FHNB having the first bank located in a commissary located on a military installation.

Tuggle has a legendary reputation for public service in the Central Texas Community. He is the recipient of the coveted Roy J. Smith Award for Outstanding Community Service, as well as, the Boy Scouts of America Silver Eagle Award and is also one of the few civilians to become an Honorary member of the exclusive Sergeant Audie Murphy Club. Tuggle also received the distinguished MG Anthony J. Drexel Biddle Medal Award from The Association of United States Army. Additionally, he holds the rare designation of “Fort Hood Good Neighbor”, a select group of civilians singled out for their service to soldiers and their families.

Tuggle's wife, Joyce, is a native of Texas, and they have two sons, Shaun and Kevin, who also reside in Texas.

SPECIAL THANKS TO
OUR 2016 SPONSORS

OTHER CONTRIBUTORS
Prosperity Bank
The Bank of River Oaks