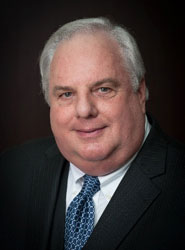 Dippel is a former director of the Federal Reserve Bank of Dallas, Houston Branch, and serves as chairman of the finance committee of the board of directors of Health Care Service Corporation (Blue Cross Blue Shield of Texas, Illinois, New Mexico, Oklahoma, Montana).

He attended the United States Naval Justice School in Newport, R.I., and served as a lieutenant commander in the Naval Reserve.

He also has served on the Texas Commission on the Arts and with numerous organizations, including the Methodist Church, the Independent Bankers Association of Texas, the Jewish Institute of National Security Affairs, the Boy Scouts, the Caring for Children Foundation, and various other organizations.

He lives with his wife, Katherine, in Brenham and has three married children—Meg, Tee and Beth—and eight grandchildren. 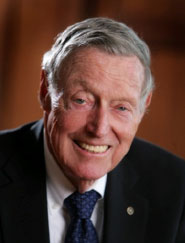 A San Antonio native, Frost is the fourth-generation of his family to oversee the bank founded by his great, grandfather, Col. T. C. Frost, in 1868. Frost Bank offers banking, insurance and investments through more than 110 financial centers across Texas in the San Antonio, Austin, Corpus Christi, Fort Worth, Houston, Dallas, and Rio Grande Valley regions.

He is a recipient of the “Aguila Azteca,” the highest honor the Government of Mexico can give to a non-Mexican citizen.

Frost began his banking career in 1950 and was elected assistant cashier in Frost’s foreign department in October. In 1962, he was elected president and, in 1971, chairman of the board.

Committed to educational excellence, Frost currently is chairman emeritus of the development board of the University of Texas at San Antonio and is past executive chairman of the board of governors of his alma mater, TMI. He is also a trustee emeritus of Washington & Lee University, senior trustee of Austin College and is an honorary member of the development board for the University of Texas Health Science Center at San Antonio.

He also is past chairman of the Texas Independent College Fund and is a former senior warden of Christ Episcopal Church.

Frost is married to Patricia Holden, a San Antonio native, and they have four sons—Tom, Patrick, Bill, and Don—and 14 grandchildren. 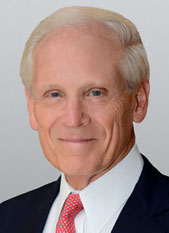 Grant attended Southern Methodist University on a swimming scholarship where he majored in finance. He earned an MBA from the University of Texas at Austin. Upon receiving his degree, he joined the executive training program at Citibank in New York City.

After five years he returned to the University of Texas to earn a doctorate in finance and economics, and upon completion in 1970, Grant joined Texas Commerce Bank as senior economist.

After five years at Texas Commerce, Grant joined Texas American Bank in Fort Worth, where he became chairman and CEO of Texas American Bancshares in 1986. Grant is a member of The University of Texas at Austin College of Business Administration Hall of Fame and the boards of trustees of the foundations of Dallas County Community College and University of Texas Southwestern Medical School.

He is a member of Chief Executive Organization, World Presidents Organization and is a past chairman of Communities Foundation of Texas.

In 2010, he was inducted into Horatio Alger Association of Distinguished Americans, for which he is also a member of its board of directors. He has served on the boards of trustees of SMU and TCU, and the boards of directors of numerous public companies.

In 1987-1988, he served as international president of the Young Presidents Organization.

He and his wife, Sheila, have two grown children, Mary Elizabeth Grant and Steven Clay Grant. 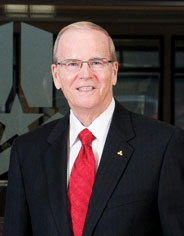 Pope graduated from Baylor University with a degree in economics. Following his graduation, he went to work in the bank management training program at First National Bank of Dallas, and after completing that program, he joined his father at the First State Bank in Overton.

Pope has long been involved in numerous local and area organizations. He is a former member of the board of regents of Baylor University and the Hankamer School of Business Advisory Council. He also served on the board of trustees of Letourneau University for eight years, including three years as chairman.

Pope and his wife, Joyce, are members of First Baptist Church of Longview, where Pope serves as a deacon.

In addition to their children—Jan, Rog, and Jennifer—the Popes have 10 grandchildren.

SPECIAL THANKS TO
OUR 2014 SPONSORS