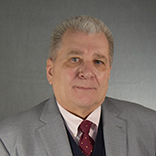 Before joining SHSU he was Global Director, Crisis Management and Security at Lyondell Basell Chemical, and before that he was Vice President, Global Asset Protection at Walmart Stores Inc.

Scott retired from the US Foreign Service, Department of State, Bureau of Diplomatic Security (DSS), as a Special Agent-in-Charge. His DSS overseas postings included Rome, Beirut, Khartoum, Moscow, and Algiers.

After September 11th he rejoined the US Senior Executive Service to lead the creation of the Department of Homeland Security, Transportation Security Administration where he pioneered the development of behavior based anti-terrorism screening techniques for transportation. He began his career as a military intelligence officer in the US Coast Guard Reserve.

He earned a Master of Political Management degree at George Washington University, and a Master of Science in Strategic Intelligence from the US National Intelligence University at the Defense Intelligence Agency. He also successfully completed the graduate certificate in business leadership program at Cornell University. Scott received his undergraduate education in the Administration of Justice and Psychology from the University of Pittsburgh.