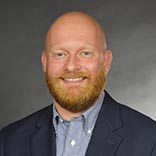 Dr. Jason Ingram is an Associate Professor in the Department of Criminal Justice and Criminology and joined the faculty in 2018. He earned his Ph.D. in Criminal Justice from Michigan State University (2010) and his M.A. (2003) and B.A. (2001) degrees from Southern Illinois University, Carbondale. His primary research interest focuses on police culture. Specifically, his work examines how cultural attitudes are shaped by officers' work environments and how culture influences police practices. Other research interests include police use of force and the role of first line supervisors in agencies. His work has appeared in Criminology, Journal of Criminal Justice, Police Quarterly, and Policing: An International Journal.