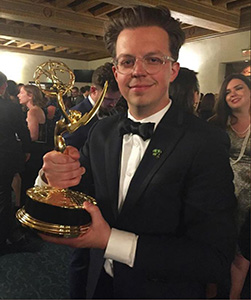 Since his 2008 graduation, Scott’s plays have appeared across America. His plays include Bleedin’ Trees (2011 Goldberg Playwriting Award, NYU), Robot Songs (2012 New Works Festival, Phoenix Theatre), The Hopeful Monster (The Cherry Pit, NYC), The Wilds (Barrow Street Theatre, NYC), and Grand Canyon (The Kennedy Center, Washington D.C.) He is a staff writer for Cyboars, a new CGI series, and was a writer’s assistant for Law & Order: SVU. At present Scott is an associate writer on NBC’s “The Blacklist”. He holds an MFA in Dramatic Writing from NYU and lives in Brooklyn with his wife another SHSU alumni and actress, Kara Durrett.