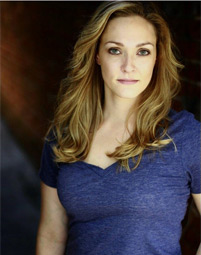 Jen has been acting professionally in Houston at theatres such as Texas Repertory Theatre, Mainstreet Theatre, and Unity Theatre since graduating in 2006. She has most recently appeared in Unity Theatre’s production of Almost Main. Her other credits include: Sylvia (Sylvia), The Heidi Chronicles (Susan), I Hate Hamlet (Deirdre), and Miss Firecracker Contest (Popeye Jackson). Jen has recently moved to New York City.